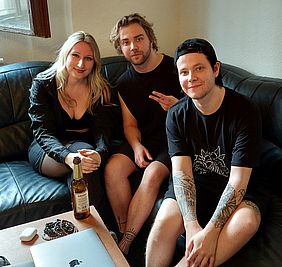 Anika: First of all congrats to your awards at the emma gala. I heard it is the most important music award in finland.

Aleksi: Thank you. Yeah, it is.
Olli: Thanks.
Aleksi: Yeah we won six awards in total, which is pretty amazing.
Anika: Wow!
Olli: We were nominated on four and then we won six.
Aleksi: Somehow we ended up winning six.

Anika: Almost one year ago you took part in the eurovision song contest in Rotterdam for Finland and you were very successful. Number six was an incredible success. How did your life change after this?

Olli: Oh I‘m busier, I’d say. (laugh) We got many shows, bigger tours and everything like that. But we also had to make an album. That’s coming out this summer.
Aleksi: Yeah in a few months.
Anika: Yes, on July 8th.
Aleksi: (laugh)
Anika: Yeah, I did my job.

Anika: How do you stay down to earth?

Anika: You were six weeks on tour through the states, tell me about it. What was your highlight?

Olli: L.A.! The legendary „Whisky at Gogo“ (Anmerk. d. Red.: Rockclub at Sunstrip) for sure.
Aleksi: And we had our own show in New York. That was pretty cool.
Olli: Yeah!
Aleksi: It was a great tour and we had 35 shows. First time in USA.
Anika: Wow. I never been to the U.S...
Aleksi: It was a great place to tour.
Olli: USA is for most bands THE place to play.
Anika: Yeah, I can imagine.
Olli: It was kinda weird to finally be there and do real touring there. So it was magical.

Anika: What's the difference between american and european crowds?

Aleksi: We definitly have more fans at the moment in europe, which you can see in the shows. They are a bit more energetic I’d say. But there were lots of fans in US, too.
Olli: Yeah surprisingly.
Anika: And that’s great.
Aleksi: Yeah, that’s great. I think the US audience likes a lot more heavier stuff and the european audience likes the party songs more.
Anika: Which crowd is crazier?
Olli and Aleksi: European!
Anika: European? Oh really? Cool!
Olli: They are better at partying.

Anika: Right after the states you arrived here in europe for the Electric Callboy tour, for how long haven’t you sleep in your own beds?

Olli: Oh actually we got a few days. Just before the Emma Gala everybody had like two days at home.
Aleksi: But before that it was nine and a half weeks. A long time…
Anika: Yes, a long time. And you still like each other? (laugh)
Aleksi and Olli: (laugh) Yes, we do.

Anika: Tell me about a normal day on tour, when do you wake up? What are you doing the whole day?

Olli: It’s a ground up hard day. You wake up, you think what city this is…
Anika: But which time do you wake up normally?
Olli: 10. a.m., 12 a.m.
Aleksi: Joel usually wakes up very early, like maybe eight. But for example today we woke up at eleven, came here, ate breakfast, went back to the bus then made some music. Then we came here and did soundcheck and now we’re here. (smile)
Anika: But do you have a little free time to see the city?
Olli: Sometimes, not always.

Anika: On July 8th you release your new album „The Lifestyles of The Sick and Dangerous“. Tell me something about it? I’m sure the people out there wanna know more details.

Aleksi: Oh it’s gonna be a great one. We already finished the album last year in october. And we took a few months where nobody heard the album and then we listened to the album again a couple weeks ago. And we still think it’s the best album so far. It’s also the first one with the new lineup.

Anika: Which song is the best so far?

Anika: You released four songs from the upcoming record: of course "Dark Side", "Balboa", "We Are No Saints" and "Bad Idea". Which is your favourite so far and why?

Olli: "Balboa" is fun to play live.
Aleksi: Yeah!
Anika: Do you play it today?
Olli: Yeah.
Aleksi: For me it’s "We Are No Saints", there is so many sense on it.
Anika: I liked that music video in the church.
Aleksi: Thank you. (smile)

Anika: How do you write songs? Is anyone in the band inolved?

Aleksi: Usually there is me, Niko, Joel, Joonas and Olli. And then once we have the demo we go to the studio and Tommy comes in and plays his stuff as well. It’s kinda all of us.
Anika: That’s cool for a band. It’s not in every band the case.
Aleksi: It depends on the day I guess. Today it was me, Olli, Joel and Niko writing on the bus.

Anika: And where do you get your inspiration. Is it sometimes fiction or more reality?

Olli: More real life in general. "The Lifestyles of The Sick and Dangerous" – there is a lot of things that get us mad, irritates us. There is a lot of "We need to get this shit out of our system and put it into the songs".
Aleksi: There’s a lot of bad stuff.
Anika: At the moment I listen a lot to a very old song of yours. It’s called „Another Sun“ and I love this one very much.
Aleksi: Thank you.

Anika: Who is currently your favourite artist in music?

Olli: Ohhhhhhh.
Aleksi: That’s not an easy answer!
Olli: Well, at the moment I like to listen a lot to … it’s more like a DJ, he’s called Inny (?), electronic music.
Aleksi: I don’t know, I have so many. All kinds of different stuff.
Anika: But not only metal?
Aleksi: No, not only metal.
Olli: Most of the time we listen to a lot of pop and rap.
Aleksi: Yeah, we don’t listen to a lot of metal at the bus. Sometimes though.
Anika: Interesting.

Anika: Now I have a game for you: I think you heard of it. It’s called either or?

Olli: Alright!
Anika: Just answer quickly and don’t think about it too much.
Aleksi: Alright.
Anika: Are you ready.
Olli: Sure.

Anika: Either Chocolate or gummibears?

Anika: Streaming or listening via Vinyl

Both: Listening via vinyl.
Anika: So very oldschool. (laugh)

Anika: Which is more important to you lyrics or melody?

Anika: Are you a dreaming person or realistic person?

Anika: Then past or future?

Aleksi: Wanderlust.
Olli: Too. I hate when I get homesick. It’s not a good feel.
Anika: Well some people never get homesick.

Anika: Next one: optimist or pessimist?

Both: Optimist! For sure!

Anika: That’s good. And last one: Bad Idea or Balboa?

Both: laugh.
Aleksi: Oh that is hard...
Olli: Saints!
Everyone: (laugh)

Anika: It was a cool interview. Thank you for you time.